Water Quality - 2/22/2022
We have had a dry and relatively warm February so far, with a high temperature of 67 degrees at the marina on the 13th. This will not last if the predictions for March and April are correct. Since we are still in a La Niña weather pattern, March and April are predicted to be cooler and stormier than average, but May is predicted to be warm. This will be good news for snowpack and lake health as it will delay lake warming. However, June and July are the most critical months because we need rain during that period to hold off opening the headgate.

Maintaining good water quality this past summer was a challenge due to the warm and dry weather and an abundance of phosphorus brought in from the river. The lake temperature warmed by 13 degrees after the triple digit heat wave in min-June, reaching maximum lake temperature a month earlier that typical. In addition, we got only 1.3 inches rain from April to May and did not receive any rain from June 15 to September 15. To keep the lake full we had to open the headgate May 15, two months earlier than we like. This becomes a problem because phosphorus in the river is over five times what we want in the lake (see graph below). We have made a lot of improvements to reduce the amount of water needed to keep the lake full, but with climate change we get less rainfall, and what does come is clustered in a few days instead of spread out throughout the winter. 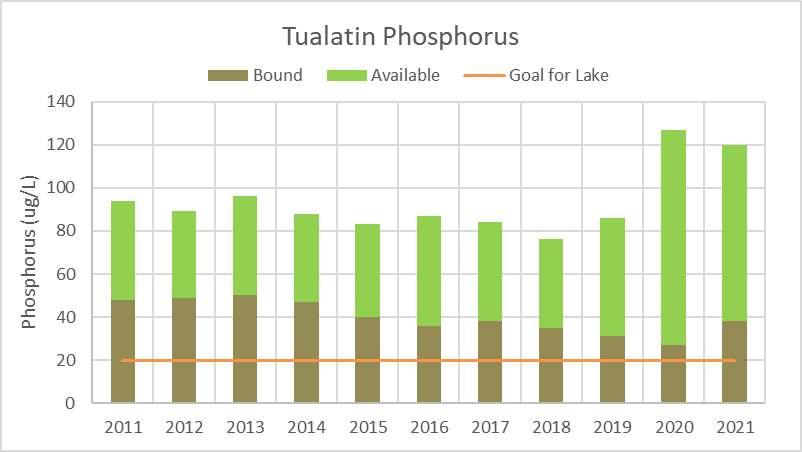 Since high phosphorus is the primary reason we have cyanobacteria blooms during summer our focus this year is to improve our efforts to remove phosphorus before it gets to the lake. Last year our treatments were interrupted due to dredge activity, but we will focus on re-implementing the project this spring. Our primary project will be to continue dredging near the headgate and install an improved alum injection system to sequester phosphorus and settle sediment as soon as it leaves the river.

We will intensify our monitoring of water coming in from the river to ensure we are removing as much phosphorus as possible. This will allow us to make changes over time to increase the capture rate and plan future dredge projects. The goal is to have the phosphorus concentration of incoming water close to or below the concentration in the lake. This may take a few years to accomplish, but since this is the single largest source of phosphorus during summer it is a priority.
The other tools we use to control phosphorus are the aeration system and surface alum applications. Aeration decreases the amount of phosphorus that comes from the sediment, but testing in 2020 and 2021 showed that phosphorus released from the sediment stays near the bottom of the lake. The concentration of phosphorus near the surface is what feeds cyanobacteria, and that is influenced by water brought in from the river, not so much from phosphorus at the bottom of the lake.

Our surface alum application program is used when other phosphorus control methods are not adequate. Applying alum to the lake from a boat strips phosphorus from the water column and locks it up on the bottom of the lake. In addition, it physically binds cyanobacteria and drags it to the lake bottom, helping to clarify the water. Our application during summer 2021 was not heavy enough to accomplish the desired effect, so learning from that experience we will modify the approach and apply heavier next time.

Hopefully our alum program on the canal is sufficient that we do not have to undergo the expense of using other control measures. But at the end of the day lake safety is the primary concern so we will do what is necessary to control cyanobacteria and not end up with a potentially toxic bloom.