Water Quality - 12/21/2020
As we enter the holiday season we can be grateful to have made it through summer with our health and the ability to keep the lake functioning as normal. It was nice for residents stuck at home to be able to recreate and enjoy the lake. Hopefully summer 2021 will be closer to normal with a vaccine widely available and the cloud of COVID past us.

This was an interesting summer for water quality, and after the holidays it will be time to dive into the data to see the effect of to two major influences on the lake. The first, not operating hypolimnetic aeration this summer and the second, wildfires and smoky weather during September.

We did not run aeration this year because in the past we wanted to see how the lake would react to using alum but not aeration. Our aeration system was installed in 2002 and we have operated it every summer since. We started using alum in 2005 and have used it every summer, but some years we did not do surface applications, only injections. Therefore, we have never used alum without using aeration.

Our aeration system circulates oxygenated water from around mid-lake to the deepest parts of the lake, replenishing oxygen lost during biological activity. Keeping oxygen near the sediment is important because it reduces the amount of mineral-bound phosphorus that is released under anoxic conditions. However, circulation also warms water near the sediment, which may increase biological activity. Our goal was to find out how much the phosphorus concentration in the deep water would increase with the lack of aeration, and how that compares to conditions before the aerators were first installed. The hope was that even though phosphorus in the deep water increased, it was still less than the concentration prior to installing the system. We will know more once data are analyzed.

The other factor that altered lake biology this summer was the wildfire smoke that settled into the valley in September, typically one of the hottest months of the year. Smoke reduced the intensity of sunlight hitting the lake surface, which decreased the amount of heat put into the lake and reduced photosynthetic activity.

The chart below includes a lot of data but provides an overview of what happened during the month. The beginning of the month was a typical summer, with air temperature (green line) fluctuating between the mid to upper 80’s and cooling to the 60’s at night. The water temperature (blue line) shows diurnal fluctuation due to the air temperature change. Solar radiation (orange line) shows sunny days during that time period. 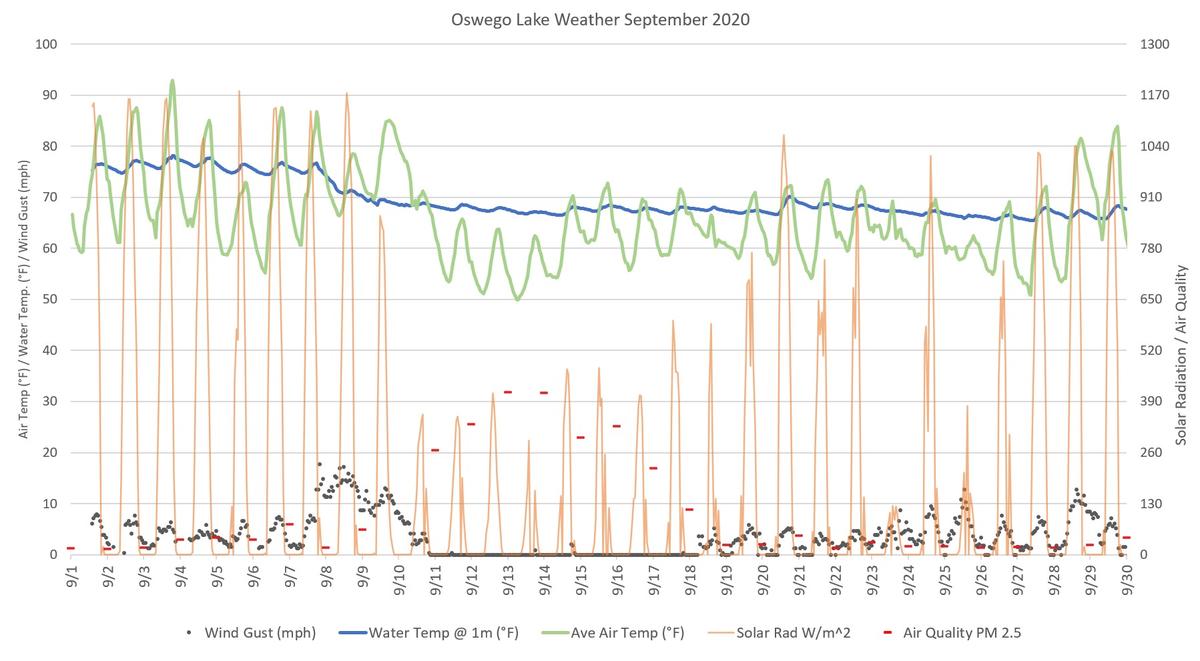 Things get interesting around September 7th, when the wind hit us. There were fires in the Cascades prior to this date but were not very widespread before winds came. The wind reading (black dots) shows gusts nearing 20mph at the lake on September 8th, which started cooling the water by a few degrees. However, by September 11th the winds died completely, and solar radiation peaks declined considerably due to smoke settling into the valley. Also, air quality got worse as the AQI (red dots) increased.

The daily high air temperature during the smoke phase stayed below the lake temperature, leading to an increase in the cooling trend. Winds picked up again by September 18th, which started clearing out smoke, improving air quality conditions, and allowing sunlight again to fall on the lake. Air temperature did not increase to pre-smoke levels right away, so the lake stayed cool. By the end of the month the air temperature warmed again, but by then the shorter days heading into fall meant the water temperature did not appreciably increase.

What does this mean for lake biology? A cooler lake and less sunlight reduces the capacity for cyanobacteria and algae to grow. Once we have a chance to analyze our data it will be interesting to see how these populations were effected by the conditions.

Our dredge work in the canal has been suspended due to the weather and canal conditions. The story often told is the canal between the river and lake was blasted out of solid rock, but that is only partially true. That was the case closer to the lake where the exposed rock shows the canal was created with considerable effort, but towards the river there is no hard bottom to the canal and equipment was fighting mud and water. This being an La Niña winter we are expecting it to be very wet, which will make canal work more of a struggle, so we decided to put off the dredge work until spring, when rain is mostly past us.

Our drawdown period ended December 1 and we are refilling at a steady pace. We received over two inches of rain since Friday so the lake came up rapidly. This week will be dry, but the creeks are still contributing a fair amount of groundwater to the lake so the water level will continue to rise. As of Monday morning the lake level is 90.73 feet above sea level. We should fill early this year due to the wet weather expected in January. Take note, contractors may have less time to complete their lake work this winter if we refill rapidly.

This is the tenth year of operation for the Oswego Lake Watershed Council, which was formed after the encouragement of Stephanie Wagner, then Education Director for Friends of Tryon Creek. The Lake Oswego Corporation is one of the founding members of the Board and I am regularly involved in Council activities.

The Watershed Council has come a long way in the past ten years, with 16 ongoing projects that include restoring a native oak woodland habitat to partnering with local schools to address climate change by protecting and planting trees as part of their Trees on Campus program. Their current budget of nearly $100,000 is a result of hiring Jack Halsey as a full time Coordinator to make connections with funding organizations and to organize work parties throughout the city. In addition, Kat Maloney was recently hired as a Community Outreach Specialist, and also runs the Soil Your Undies campaign.

This excellent work of our Watershed Council is possible because of grants and generous contributions from watershed residents. I encourage you to participate in work parties (hopefully this will be possible this summer) and support their work financially. You can give a tax deductible donation that will help them carry out even more restoration projects that ultimately help improve the health of Oswego Lake.

Have a wonderful and safe holiday season.