Water Quality - 10/25/2020
We are half way into our drawdown this year, with the lake down five feet already. For those new on the lake this is a new experience, and as the water recedes you are going to see things you may not have noticed before, or for a long time. This can include patio furniture, sunglasses, or anything else that may have blown off your dock over the summer. You also may see things considered normal for lakes, which include bryophytes, aquatic plants, or clams. None of these are problematic, and many are beneficial to the health of our aquatic system.

We have several species of aquatic plant, and most are not a problem, and actually provide important habitat for small fish and aquatic insects. However, we do have two non-native invasive weeds that can overpopulate if they are not actively controlled. One plant is Brazilian elodea (Egeria densa), which is native to South America and has no natural controls up here in Oregon. It looks similar to a native elodea species, but has more robust leaves and a brighter green color. The other is curlyleaf pondweed (Potamogeton crispus), native to Eurasia, Africa, and Australia. 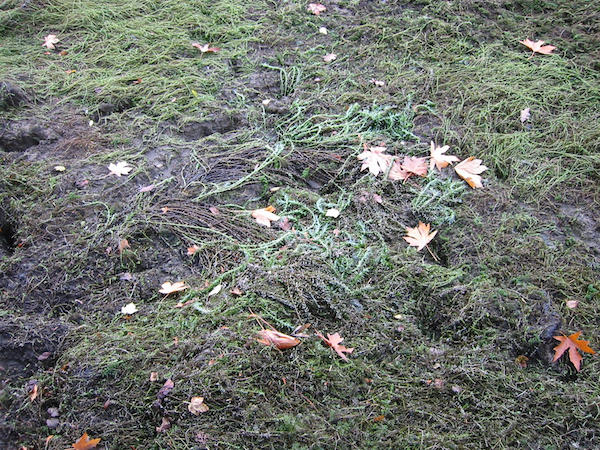 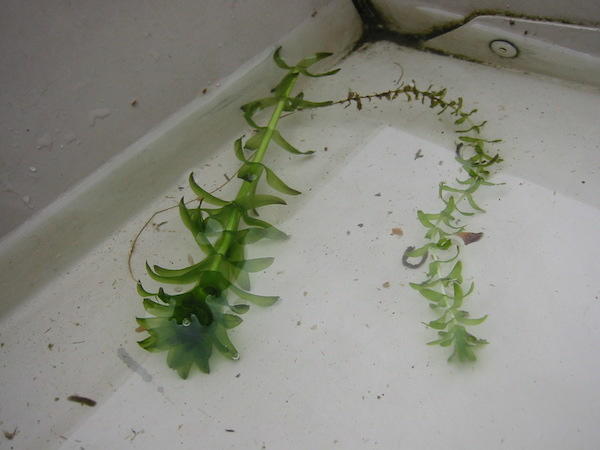 Brazilian elodea on left next to native elodea on right.

As we lower the lake these plants are exposed so easy to spot and treat. During the first week of full drawdown our certified pesticide applicators will be treating the non-native plants with herbicide so they do not continue to grow once the lake is full next spring.

In addition to spraying exposed plants with herbicide, one of the benefits of a drawdown is to expose aquatic plants to winter weather, and hopefully slow their growth. This year we may be more successful than in past years because it looks like we are going to have a very cold January according to the most recent seasonal forecast from the Oregon Department of Agriculture.

We are in a La Niña phase, which means the tropical ocean temperatures are cooler than normal, causing the jet stream to bring cold air down from the arctic. The winter of 2016/17 was last time we were in La Niña, and Portland had a foot of snow that stayed around for a week. Fortunately, if that happens again we are all working from home with the kids in online school, so the disruption will not be as bad as last time (other than keeping the kids on task with snow outside). However, heavy winter weather always causes concerns for flooding, as discussed below.

After the heavy snow in January 2017 we got a lot of calls, because something similar happened in the winter of 1995/1996. Heavy rain had swollen the rivers before an arctic blast brought snow to the Metro area. This was followed by a pineapple express that produced heavy rain, melting the snow, which ran off into already swollen rivers. The Tualatin river peaked at an elevation seven feet over our headgate. This devastating flood is burned into the memories of lake residents who experienced it. However, after the work we did in 2010 a repeat of this flood event will not have the same impact on lake residents.

During the 1996 flood, approximately 5,100 cfs flowed from the river to the lake during its peak. Of that, only about 2,600 cfs went out the spillway in our old dam, meaning the lake continued to rise until water could leave through other pathways. In 2010 we modified our dam to allow 6,000 cfs to pass through the opening, essentially allowing us to pass all the water that came in from the river, and keep the lake from going over the seawall in all but very few locations. In fact, as part of this process we were able to take almost 300 homes out of the FEMA floodplain.

So, if we have a repeat of 1996 we will be in good shape. This does not mean there will not be problems in Oswego Canal, since that is where all the flood water comes into the lake, but the lake level will be much lower so this water has someplace to go. I also want to mention that even if the headgate does overtop a little bit this winter it does not spell disaster. Remember, the 1996 flood overtopped the headgate by seven feet. If a future flood overtops the headgate by only a foot or two we have ample capacity to pass that water down the canal with only minor problems.

Have a great Halloween and be safe.